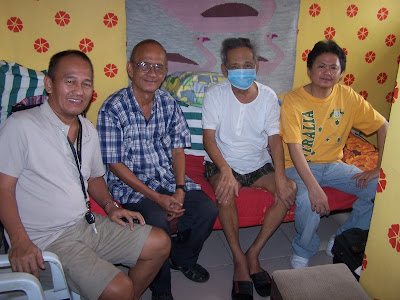 In the picture from left, Bro. Ed Marfori (Bagumbayan No. 4), yours truly, Kuya Boy and Bro. Gilbert Pazcoguin (Manuel Roxas No. 152).
It is now 5:00 A.M., in the land of the Ilonggas. About an hour ago, I was notified that an old habitue of the Plaridel Temple's Acacia courtyard beer bust crowd, Kuya Godo Boy Senires, age 73 (?) passed away after six months fighting off that mean reaper C.

I am still awake, putting on the finishing touches to a stained glass door panel I am making for the YMCA Iloilo Ecumenism Hall. The stained glass panel depicts the calvary scene first envisioned some 2,000 years ago. Now, with a dear friend's passing, I am adding a figure of a modern man contemplating his fate as a speck of dust travelling through a temporal world.

Kuya Boy, ATTY. GODOFREDO SENIRES, a retired court administrator in the old DOJ (before the courts came under administration of the Supreme Court) and a Freemason par excellant, touched the lives of many brethren who crossed his path. As for me, we immediately clicked off from that adage - "they work best as they best agree".

Kuya Boy is a native of Sambuan, Cebu; a fishing town along Tanon Strait facing Negros Oriental. He came to Manila seeking not only fortune but also aspiring to be a lawyer - against the wishes of his father who wanted him to study engineering. Since he was on his own, he had to work his way through his aspirations.

Somehow he found his way to the Lacson Law School run by a Mason; the late MW Bro Rene Lacson. He did odd jobs in law school to finance his studies. Kuya Boy became a lawyer. There must have been something about Brother Lacson that became the "tongue of good report" to Kuya Boy. Atty Senires also became a Mason and through the years prospered in his calling.

When I met him, we were both already in retirement and he was serving as GLP Assistant Grand Secretary. There were many things about him that were similar to my own circumstances.

YMCA was my first exposure to man's inate wish to repay humanity for his more fortunate circumstances and spread this belief to others in an organizational manner. The concept of charity, if you wish. I did not realize how committed I was to the YMCA value system until the great fire that hit Iloilo City in 1966. I was only 18 years old at that time. The fire that gutted more than half of Iloilo City's business district swirled around the YMCA compound. Together with eight other youths, we struggled the whole afternoon to save as many equipment and furniture into the open spaces. YMCA survived that fire by a seeming miracle and the lessons of that experience stayed with me.

Kuya Boy travelled through life as a lawyer alongside Masonry. His life directions were alongside those of the legendary Pinoy Masons in the likes of MW Bro Reynold Fajardo and MW Bro Reynato Puno, to name a few. Throughout his Masonic life, Kuya Boy figured prominently in the resolution of the crises that came into the Philippine jurisdiction. That Kuya Boy would spend his retirement in the service of the Craft was a logical conclusion, he found his second calling. He repaid the institution that brought meaning to his life.

When I retired, I earned enough from consultancies to finance a regular beer bust lifestyle with the brethren in Manila. Somehow, there was a seeming emptiness to all those despite the joys of fellowship. In late 2008, YMCA Iloilo was in a crisis of sorts. The elders of the Iloilo association were Masons and they offered me a job as their OIC/General Secretary. Whammo, this was it! The pay was way below my "rackets" in Manila. But like Kuya Boy, this was a chance of a second calling, a once- in-a-lifetime opportunity to be of service to the next generation. Besides, if majority of the elders were Masons how could the job be so bad. I have not regretted that decision.

Kuya Boy and myself smoked, him with cigarettes - me with "linikit" native tobacco cigars. He had this executive check up about 5 years ago and his doctor asked if Kuya Boy was bothered by smoking. Kuya Boy said no but even if it did, at age 67 (?) he could not care less. Smoking and coffee kept the both of us trim (ha! talk of rationalizing) . When I visited him the last time last March, he said he was diagnosed with CA of the bones not of the lungs from smoking. Heaven forbid but if I go his way, I think its going to be CA of the fingertips (cigar smoke is not inhaled).

I started building a fiberglass boat with the intention of keeping with our date to meet up for his birthday bash in Sambuan right after the Davao ANCOM [2011]. Last December, Kuya Boy sent me a text saying the date was off, without reasons given. I completed the hull last February before running out of funds for the powerplant. Last March I came to know of his illness.

It was not meant to be.

I don't think I can even attend his funeral. But hey, sometime when you get to visit my shop, there will be a stained glass door panel with the calvary scene. In the foreground will be a figure of a modern man tinkering with a laptop, contemplating his place in the scheme of creation. I just hope that figure will resemble Brother Godofredo Senires.

The will of God is accomplished. So Mote It Be. Amen. Grand Honors, Brethren.

VWBro [Atty.] Godofredo 'Boy' Senires Jr., a Past DDGM of MD NCR-E and our immediate Past Assistant Grand Secretary, dropped his working tools just past midnight. To him and his family, we owe a lot.

He was many a time our Assistant Grand Secretary and he served us well in that post. He was diligent in checking out the Minutes of the Stated Meetings of Lodges, even though his honorarium was not enough for his fare (Kawit, Cavite) and his lunch. It was for the love of Masonry.

To me, his defining moment was when he tendered his courtesy resignation to our incumbent Grand Master, as Kuya Boy was endorsed by his Lodge, Andres Bonifacio #199, for the position of Junior Grand Warden.

In the meantime, he got sick. When VWBro Gilbert Pazcoguin and I visited him at the Makati Med, he was even boasting that he would attend the ANCOM in Davao and that he already had a ticket. Some of us even dreamt that this would come through -- that he would be wheeled into the plenary hall, just so he could affirm the veracity of the Certification which he prepared after all.

The GAOTU thought otherwise. I am sure, nevertheless, that he would be there with us at the plenary hall, joining us even as we toast for Brotherly Love, Relief and TRUTH! Thus will eventually be Kuya Boy's shining moment!

Just spoke to his daughter, Gladys, who informed me that the wake starts tonight, at the St. Peters Chapels, Quezon Ave. His body will be cremated on April 30, 2011. Please pass.

A very sad day for the Ramos Family. Brother Augusto Cocal Ramos, member of Lincoln Lodge #34 died [as the Ramos family was about to laid to rest his wife] to eternal peace April 14, 2011. Brother Augusto was one of the six Ramos brothers, including my deceased father that was conferred and raised to the sublime degree of Master Mason all in one day.

May you Rest In Peace, Uncle...

If you are travelling north this holy week, please take note that Urdaneta Lodge No. 302 brethren will be conducting its annual motorist assistance project on Wednesday, April 19 and Thursday, April 20 at Petron Urdaneta.

From Bro Rod Mina
via Bro Kenneth Tieng.
Posted by FilMasons NSW at 9:38 AM No comments:


Silver Gate Three Stars Lodge No 296 of San Diego, California cordially invites you to our Brakfast Fundraising on May 01, 2011 at SGTS Masonic Hall. Please see details below, thank you.

To all Worshipful Sirs, Brethren, members and friends, you are all invited to a hearty breakfast at:

KIDS UNDER 7 FREE
Posted by FilMasons NSW at 9:02 AM No comments: 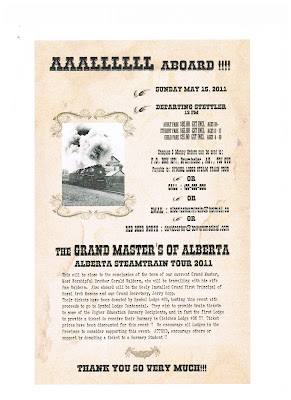 On Sunday May 15, 2011, the Grand Master's Steam Train Tour 2011, will be leaving the Stettler station with 400 passengers on a return train ride to Big Valley with MWBro. Gerald Waldern [Grand Lodge of Alberta - Canada] and wife on board along with the GFP-Elect RWBro. Jerry Kopp. The train ride features entertainment, a train robbery and plenty of fellowship and fun. Discounted fares are being provided for this event.

Kung meron po mga kuyang na may planong mag vacation and to see our place which is a tourist spot also this is the time and meet the brethren from other lodges you are all welcome. Please read the attachment for more info.

VWBro Aurelio Medina, of Tamaraw Lodge No. 65 & MH del Pilar No. 272, body lies in state at the St Peter's Memorial Chapel at Commonwealth Ave., QC[ in front of INK cathedral]; as per VWBro Jimmy Camino. Masonic Funeral rites will either be tomorrow or Friday, 6PM. Will confirm. 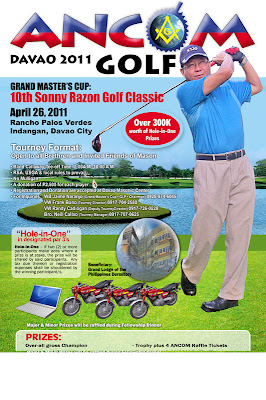 Posted by FilMasons NSW at 10:02 AM No comments: