GLC Relief for Victims of the New Zealand & Japan

The tragic reports of devastation and suffering resulting from powerful earthquakes in Japan and New Zealand have shocked the world. As Masons, we are concerned about the well being of the citizens of those countries, particularly our brethren and their families.

Please share this information with your lodge members as soon as possible. If your members, lodge, families, or friends would like to make a contribution, please make your check payable to the MSA Disaster Relief Fund and mail it to:


Grand Lodge of California
Office of Philanthropy
Attn: Denise Avila
1111 California St
San Francisco, CA 94108
Please indicate on your check how you wish for your gift to be distributed (Japan or New Zealand). If no designation is made the funds will be divided equally between Japan and New Zealand.

If you have any questions or need additional information, please contact Adam Kendall of the Masonic Service Bureau at 415/292-9137 or akendall@freemason.org.

Please open your hearts to the victims of these disasters, and give what you can to help. 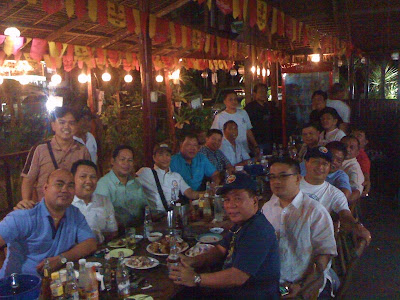 Fifty or more brethren made their way to Travellers Sizzling House for an eyeball fellowship... there is nothing like an impromptu eyeball gathering of Kuyangs. A great way to maximize Lodge attendance, just say that Kenneth will be in attendance!
Posted by FilMasons NSW at 4:01 PM No comments:

In Support of Our Schools:

Every April, the Masons of California and communities throughout the state celebrate Public Schools Month. Together, we make a profound difference in public education and seek to showcase one of our schools to demonstrate our support of all the good work they do.

The event will include a $49,000 check presentation for the Investment in Success Scholarship Program, which seeks to help deserving high school seniors in the San Diego Unified School District obtain a higher education and gain access to life opportunities.

Copyright (C) 2011 Masons of California. All rights reserved.
Posted by FilMasons NSW at 3:42 PM No comments: 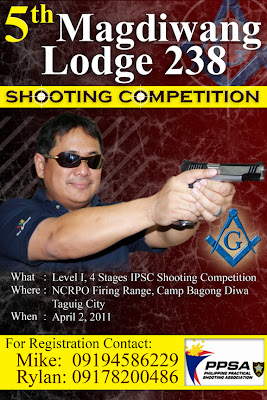 The officers and brethren of Magdiwang Lodge No. 238,
under the jurisdiction of
the Most Worshipful Grand Lodge of the Philippines
is inviting you to participate & join their
5th Magdiwang Lodge No. 238 Shooting Competition.
This event is going to be held on April 2, 2011
at NCRP Firing Range, Camp Bagong Diwa, Taguig City.
Thank you Brethren and hope to see you there.

I just want to congratulate the following brethren especially the Armed Forces of the Philippines (AFP) Sojourners Club, Navy Chapter, under MWGLP for hosting the very cheerful and high spirited monthly fellowship held at the Philippine Navy Golf Club last 6PM of 09 March 2011:

The event was attended by fellow Master Masons coming from the other AFP branch of service (PA and PAF) to include brethren from the Technical Service, AFP and officially graced by the incumbent AFP Sojourners Club WBro  [Maj Gen] Tony Villarete of the Philippine Air Force.

The occasion thus began in order and conducted in peace and harmony among fellows. The next host will be the Philippine Army [vice Air Force] as agreed when we are about to separate and return to our respective places of abode.

"We are all familiar with the term “Sojourning Mason”, but did you know that a formal, recognized Masonic organization named “National Sojourners” actually exists?

The group had its beginning over 90 years ago in August 1898 in the Philippines, upon the arrival there of a North Dakota Regiment of Volunteer Infantry. The Grand Lodge of North Dakota had granted this Regiment a dispensation for a field lodge and it conducted its first meeting upon its arrival.

Meetings were held regularly thereafter—once even while under hostile fire at the Culi Culi Church with the officers of the lodge wearing sidearms while bullets splattered through the roof!

The Philippine “Sojourner Club” resurfaced in 1907, open to Masons who were not members of local lodges, and soon had nearly 200 members from every State and Territory of the United States and eight foreign countries. As time went by, most of the Philippine Sojourners scattered throughout the United States. A group of these Masonic military officers, meeting in Chicago, Illinois in 1917, recognized the highly transient life of Master Mason military Officers and formally organized the “Chicago Sojourners Club.” Additional Clubs quickly formed at army posts and naval bases around the nation and overseas. In 1927, the word “Club” was dropped and the National Sojourners were incor-porated in 1931 as a formal part of the Masonic Fraternity."

From The Masonic World: "Born in War, Nurtured in Peace"
Posted by FilMasons NSW at 1:33 PM 2 comments:

This is in response to the many questions of the Brethren worldwide about Maynilad Lodge. Maynilad Lodge (commonly known as Filipino Lodge) is a Lodge under dispensation beholden to the Grand Lodge of Free and Accepted Masons of the District of Columbia.

The Lodge is named in honor of Filipino Masons. Although the Lodge is amenable to Filipino culture, it is in conformity to the Masonic Code of the Grand Lodge. The membership is open to all Masons in Good Standing who belong to a Legally Constituted Lodge Recognized by the Grand Lodge of the District of Columbia.

Maynilad has been working under dispenstion since November 2009 and expect to be chartered on May 11th at the Annual Communication of the Grand Lodge of the District of Columbia (200th Anniversary of the Grand Lodge). We are hoping to be consecrated on June 11 (International Brotherhood Night in Washington, D.C.).

Yes, we are still accepting Petitions For Affiliation for Charter Membership. We invite you to join us in this endeavor. We need more members to show the Grand Lodge that we have enough members to ensure stability and growth. So, if you would like to join us; in this perhaps once in a lifetime opportunity to be a Charter Member of a Filipino Lodge in the Nation's Capital, we need to receive your petition as soon as possible. We will need your Certificate of Good Standing (signed and sealed) from the Secretary of your Lodge. It must show the exact dates when you were Initiated, Passed, and Raised; your completely filled out Petition for Affiliation; and your cheque for $150.00 payable to Maynilad Lodge, U.D, (If you are a Filipino Citizen whose permanent residence is the Philippines, your charter Membership Fee is $50.00). We also need a brief synopsis of you Masonic Travel (your past and present title with dates and place and other Masonic Affiliations.)

If you want to join us as a Charter Member, please email our Secretary, WBro Ken Gibala ASAP. He will send you the Petition Form. Our next meeting wil be this coming Saturday (March 12) at 1:00PM in the Scottish Rite Temple, 2800 16th Street, NW, Washington, D.C..

Our guest speakers for the night are MWBro. AKRAM ELIAS (our Lodge Member) and WBro. CURTIN WINSOR. They will be talking about the Cincinnatus Lodge No. 76 Outreach Program in Southern Pilippines which they started in 2004 in cooperation with three Lodges in the Philippines. You are all invited to attend, if within your cable tow.

Our Worshipful Master, Illustrious Bro. Ted Villapando is in the Philippines. If you would care to meet him, he will be attending the ANCOM 2011 there with other Members of Maynilad Lodge.

Thank you and May God Bless Us All, 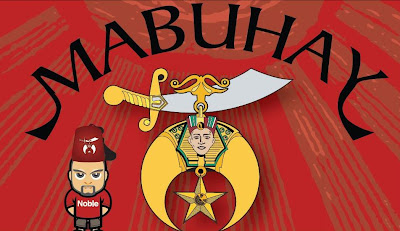 Be a Shriner and Help Crippled Children now. 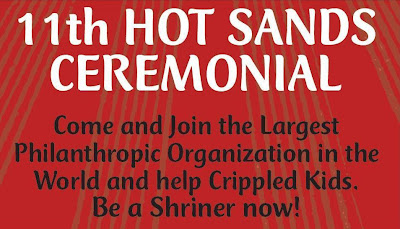 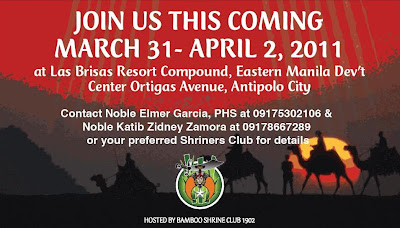 Posted by FilMasons NSW at 9:07 PM No comments: