'Agila Shriners (with jurisdiction over the entire Mindanao, Philippines) finally received its Charter last July 2, 2012 in Charlotte, North Carolina (USA) as the 195th Temple of Shriners International.
During the July 4 parade in Charlotte, the 16 Agila delegates participated, proudly displaying the Philippine flag as well as the Agila Shriners banner.

In the evening of the same day, the Khedive scooter patrol of Khedive Temple (Virginia) tendered a reception for the Agila and Mabuhay Shriners' delegates and inducted them as honorary members of the Khedive Scooter Patrol.' 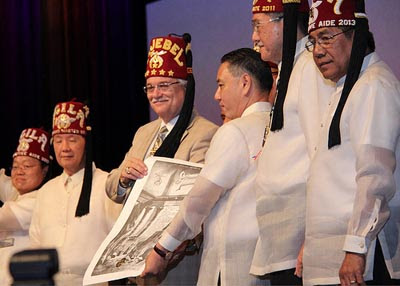 Imperial Potentate Michael G. Severe presents a charter to members of Agila Shriners during the 2012 Imperial Session in Charlotte, NC.

“The interest our fraternity has received in other countries has been wonderful to see,” said Past Imperial Potentate Nick Thomas, chairman of the international development committee. “Our international brothers are an integral part of our future and we look forward to this trend continuing in the years to come.”

Above article & photo appeared at Shriners International.
Posted by FilMasons NSW at 11:38 AM